"Fireworks, Should We See It from the Side or the Bottom?" the new wonder of anime. Our critic review and interview with the director. 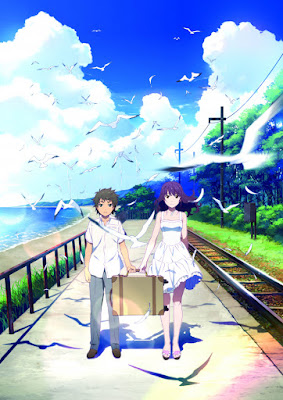 “Fireworks, Should we See It from the Side or the Bottom?” was presented at the Official Section of the Festival de San Sebastián. We have seen how recommendable is this anime film, a remake of the tv film of Shonji Iwai. It was writen by Hitoshi One and directed in tandem by Akiyuki Shimbo (his most remarkable job known in Spain is the series "Magic Madoka" and the three films resulting) and Nobuyuki Takeuchi (animation chief of several anime master pieces like "Chihiro's spiriting away" or "Ponyo on a cliff").

In their first joint job they have made an emotive and imaginative film which combines comic relief (some of them politically incorrect, thankfully nowadays), romance and adolescent friendship. At some point of the storyline it also includes a sci-fi element which alows the main characters to come back and live the last moments of their life again.

Even when the story starts with a nearly absurd discussion between friends (are the fireworks plane when we whatch them from a side?), the next fantastic turnaround will make “Fireworks” to think about the decissions made and this second chance, which not always come back (it reminds in such a way the also excellent Mamoru Hosoda's film "The girl who leapt through time") and when they do is no longer clear if this will help to change something more than ourselves. Which is no small thing.

All concludes in an ending open to multiple interpretations, that makes many people uncomfortable. But at least, we have the feeling that whether it has been happended, the life of protagonists and their feelings have been affected and nothing will be the same again for them. After all, in the movie and personal life important are not the facts, but how these incidents influence us, and they transform us into someone different. Somebody capable of taking their own decisions, irrespective of the result, and no regret of them.

As is usual in animation genre, this film has a traditional animation with a magnificent artistic direction. This is especially present  in the start and ending marvelous scenes of the film, always related to the vision of fireworks ( fireworks are the authentic leitmotiv of the story, and the key that will let characters know what is the truth or false about they are living ). This artistic section marred only by brief periods, when computer animation is present in an unfortunate way. This fact is probably motivated by limited budget and time.

But this doesn`t detract from the overall quality of the whole movie.  We can say tis is another master piece, like recent anime films “Your Name” (Makoto Shinkai) or“To All the Corners of This World” (Sunao Katabuchi), wich confirms that creativity and talent of Japanesse animation films of the last years seems inexhaustible. And we want to see them many more.

I can not finish this review without thanking Nobuyuki Takeuchi and his team at San Sebastian for their kindness to grant us an interview. He always was cordial, natural and very communicative. It is has been an honour to be able to talk, even a few moments, with this great director who grew up working next the living legend Hayao Miyazaki. No doubt Nobuyuki Takeuchi has learnt many lessons from Miyazaki, both in the artistic and the human.

Nobuyuki Takeuchi presents as co-director, Japanesse film Fireworks at  65th edition of the San Sebastian International Film Festival. We had the opportunity to speak at a private interview with  the director, and talk about cinema and animation films.


- Unfortunately in Spain, animation cinema is not very popular. What doe it mean for you to be nominated in the Official Selection  of the San Sebastian Interntional Film Festival?

It has been  an honour to take part in the festival. I am very happy to be here. It is my first time in Spain.

-There are two directors in the film. How did you share your duties?

I am the chief director, and I worked with the studio from the beginning. When we start making the movie, I asked Akiyuki Shimbo if he wanted to work with me. And he accept at once.

-Animation films from Japan usually have an unexplained conclusion or ambigous endings for westerns viewers. Why are you so fond of this kind of endings?

Main theme of the film, is desire.  Everything in the film revolves around the desire, something that maybe could happen. This is also the matter  in many films, they express a desire, so I think they can not be defined in a concrete ending.

-In Japan traditionals techniques of making movies are still very important, and in Europe digital techniques and 3D is actually most popular. Why do you think it is doe to?

In Japan, storyboard is very important, working with strokes and lines. It has roots in Ukiyo-e (a type of engravings made with techniques of woodcut), this has a big influence in the way that Japan makes animation films , and this influence extends to our days.

-Do you know any drawing artist from Spain?

I don’t know very much, that is the truth. But I am very interested in Gaudi, because my father was an architect, and we had a lot of books about him in my house.

-Is  the anime living a new Golden Age?

I think since Japanesse Middle Age, drawing art hasn’t stopped growing. In my factory , and the work we make, we value analogical drawing, but we don’t forget new technologies and new computer tools. This allows to reach an audience wich is more demanding every day.

-You worked with the great Hayao Miyazaki. How was the experience of working with him?

I learned a lot technically, but the most important was share the passion of Miyazaki for make his duty. Now, he is 76 years old and and is full of vitality. In Chihiro`s film he was already 60 years old, and in spite of his frequents back pains, this same energy made the movie end in a brilliant way. Is a man who start working very early, and he can end his day at 2 in the morning, always due this lot of passion and energy he has.

First part of film was made with kindness and talks about reality. Irruption of this fantastic element is necessary, for bringing on changes in feelings and way of thinking of the main character. It was the turning point of the history.

-Whart is the difference between Japanesse animation and films made in other place of the world?

I’m not really conscius about create a film thinking in Japanesse or Western viewers. Animation films made in Japan, show real life within Japan. It is due particular influence, things we have lived all along our lives. There is no more difference.

Surprisingly, when interview is finished, is Noboyuki Takeuchi who tell us that is the first time for him in Europe and in Spain, so he ask us about animation films in Spain. Unfortunately, we have to say that in Spain, animation cinema in the traditional meaning is not very popular. Most is digital cinema, with no traditional roots of the country. They are mainly productions that copy Hollywood’s standars, like Pixar`s style. But likewise, we told him that happily, comics in Spain have an strong health, and there are many good artists. We recomended him the film “Arrugas”, based on the comic with the same name from Paco Roca.

And, so ended our  interview, sharing videos from the film “Arrugas”, and with the promise from the director to see the movie.  We hope it inspire him!


Here is the full interview video!